Sinarapan Facts and Trivia of Smallest Fish in the World

The sinarapan (Mistichthys luzonensis) is the world's smallest commercially-harvested fish located only in the Philippines. They are endemic to the Bicol Region, specifically in Lake Buhi, Lake Bato, Bicol River and other bodies of water in Camarines Sur province, east side of the Philippines. Sinarapan describes as the tiny, monster-like anglerfish, Photocorynus spiniceps, found in the Philippines. Sinarapan are a type of goby and they are transparent, except for the black eyes. The fish have an average length of 12.5 millimeters. Males are smaller than females.

Smallest Fish in the World

Evidence of an even smaller fish—a species of marine anglerfish 20 percent smaller than the carp found in Indonesia — is presented by a University of Washington professor of aquatic and fisheries sciences. Researchers dispute the claim of world's smallest fish in Sumatra, the Paedocypris genus—members of the carp family—can be just 7.9mm long at maturity. Paedocypris feed on plankton in pools of extremely acidic water in tropical forest swamps.

Ted Pietsch, a University of Washington professor of aquatic and fisheries sciences, includes information about the tiny specimen, collected in the Philippines, in a review of what's known about reproduction in anglerfishes, so called because they have bioluminescent lures growing from their heads that they wave or cause to blink in order to attract prey to their mouths. 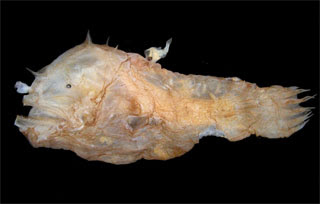 The male is attached to the middle of the back of a 46 mm long female Photocorynus spiniceps because that is how they mate. This mating is called sexual parasitism and in five of the 11 families of anglerfishes, the males are tiny compared to the females and fuse for life to their mates by biting onto the sides, backs or bellies of a female. An attached male — even two, three or up to eight, depending on the family — essentially turns the female into a hermaphrodite, providing her body with everything she needs to reproduce. For the task, the 6.2 mm male, for instance, has testes so huge they nearly fill his entire body cavity, crowding his other internal organs.

Sinarapan has been recorded in the Guiness World Record as the world’s smallest commercial fish. It measures only around 2.1-2.4mm long or smaller than a ten centavo coin.

Sinarapan is threatened with extinction in Lake Manapao Sanctuary of Buhi, Camarines Sur, the only natural abode where the small abounds. This was part of the results of a recent study completed in September 1996 by researchers of Bicol University College of Fisheries, Tabaco, Albay on the status of the Manapao Sinarapan stock .

Fishermen have reported a decreasing number of Sinarapan. Edible goby species are economically important to many parts of the Philippines where small-scale fisheries are the primary source of income.

The study revealed that Sinarapan in Manapao is subjected to a very high total mortality equivalent to more than 99% per year. This mortality is due to the significant predation by Nile Tilapia coming from the net cages installed in the sanctuary. Studies by Philippines Bureau of Fisheries and Aquatic Resources showed that Nile Tilapia prey upon Sinarapan. It was in 1979 when Sinarapan in Lakes Buhi and Bato near-totally disappeared due to over-fishing by motorized Sarap which also destroyed the breeding, feeding and refuge areas of the goby. During Sinarapan's heyday in the 1940's to 1960's, no one seriously thought of the ruinous turn of events the fishery would be in a couple of decades later in 1987, the stock of Sinarapan in Lake Katugday, a 2.65-ha. lakelet located a kilometer northeast of Manapao, was depleted of its fish stocks, including Sinarapan, because of a chemical pesticide applied by a villager who wanted an easy catch of the larger fishes. These are clear lessons of mis- management which should have taught concerned entities to be pro-active, if only they are genuinely concerned.

The Sinarapan Sanctuary Management and Development Council was also organized to help develop policies and implement community-wide programs that would ensure the sustainable population of sinarapan.

Email ThisBlogThis!Share to TwitterShare to FacebookShare to Pinterest
Labels: smallest in the world, Water Animal Species

AnimalSmile
Home for news and information, that could bring smile...